If you are interested in getting absorbed in romantic stories between two women that occur in a broad range of circumstances and with a huge variety of backgrounds, this article will surely suit your taste and exceed your expectations! Why? Because we have the cutest collection of the 4 most romantic lesbian short stories ever! Dive into the world of romance now! 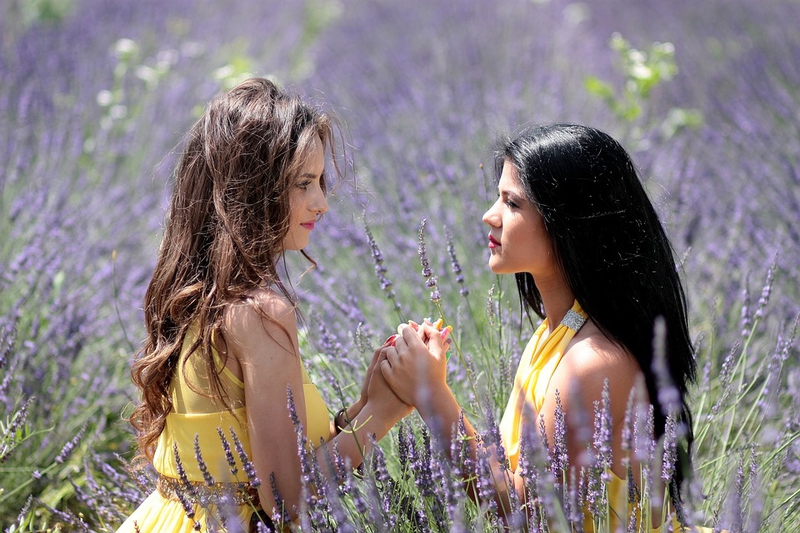 One more dreadful year at school was over, it was summer again and Veronica, a 17-year-old high school student, was stuffing her belongings in her backpack, hastily preparing to go camping with her friends the next day. Veronica was a stunning brunette, with long wavy hair, deep blue eyes and a mole on the right lower part of her belly. She thought no one would ever go so far with her to be able to notice that special body feature of hers.

Yeah, even after two years at high school, this beauty was still single, and she even started to accept that she’d never have a chance to change that. And, the buzz about going camping with her friends brought up those thoughts about being alone again. Many of her friends would come with their partners, boyfriends, and girlfriends; they will put up tents and cook together. They will sit by the fire cuddling and do all those romantic things that Veronica could only imagine. And when they asked her why she didn’t have someone special in her life, she wouldn’t know what to say. That’s because she had a secret, something she’d kept well hidden all these years - when she fantasized about someone special, it was always a girl.

She arrived at the camp site and, in a hurry to pack her stuff, she didn’t realize her shoe laces were untied. As expected, she stumbled on them but instead of falling on the ground, she was caught by an unfamiliar girl with short, blond hair. She didn’t know it back then but this girl would change her life completely. This is how their conversation went:

-Hey, I’m Jenifer. You are quite tough – you almost knocked me down!

She was totally confused. The broad smile of the pretty short-haired girl calmed her down and made her smile as well.

-Let’s go pick up branches for the bonfire!

Jenifer grabbed Veronica’s hand firmly yet tenderly and she couldn’t resist. She followed her to the wood where they had a long walk, and, more importantly, a long conversation. Something inside Veronica told her she could trust her new friend and she told her about her sexuality.

-Great! I thought I would never have a chance with you – I was sure such a cutie like you had a boyfriend!

Veronica laughed at Jennifer’s reaction to her confession, thinking it to be a joke. They exchanged phone numbers, and a few months later, sipping a cup of coffee with Jennifer, Veronica couldn’t help but thank her stars that she’d forgotten to tie her shoe laces properly that day.

This is one of the lesbian short stories that are full of spark and passion. Here is how it goes:

A real fight arose that day during the lesson in literature – two girls in the class of 18-year-olds were standing up and exchanging replicas with each other, each of them stubbornly holding the grip of their own opinion.

“Is the world of The Stranger irrational or not?”, that was the question that those two girls, Dana and Sara, got so absorbed in that they continued arguing and arguing long after the class was over.

They couldn’t help it – although they had different opinions, the argument made a spark shine between them and the tension made them both excited about each other. And none of them knew the reason why they felt that way.

As the days passed, from those arguments, tension and days of annoyance with each other raised a true romance between the two girls. Now, the only thing they debated over was at whose house they should spend the night together!

Love needs courage and here is one example of brave girls among all the lesbian short stories you might have heard or will hear.

Michaela has moved to a new town recently and she started to get along with people. She hung out with boys mostly, playing football, basketball or riding a bike. Everyone thought of her as a tomboy – she had a short, black haircut, and no one has ever seen her in a dress or a skirt or even with any feminine accessories. She is actually trying to maintain her cover-up – she wanted to appear friendly to the boys so they couldn’t get the idea they could flirt with her.

What she really wanted was a romance with a completely new girl that will help her get over a turbulent breakup with her ex, who she had to say goodbye to when her ex was leaving their hometown in search of a better future. Her ex wasn’t into long distance relationships, and Mike had to accept that. Yeah, she even had a male nickname!

Mike didn’t even notice when exactly she started staring at the girl working at the corner shop on her street. Neither could she remember when she started fantasizing about her. She only knew that her name was Sandra, and that she also had short, bleached hair and a cool badass tattoo on her right arm. And she was also pretty sure that Sandra would not at all be interested in her – because she was just that pretty, like a princess.

But then one day, she suddenly and finally decided to ask Sandra out. She knew that Sandra was finishing with her work at that time.

-Hey Sandra, this might sound sudden but you wanna hang out? You’ve been working all day.

-Yeah, why not? Actually, I was waiting for you to ask me out – I always thought of you as the brave one!

Later on that night, it was Sandra who was actually the one who kissed Mike first.

Lara was peacefully lying on her bed, while Kim was packing. Suddenly, Kim walked over to her and firmly held her hand. They both had a hard time – that was the last night they would be spending together in their hometown. Lara had received a scholarship and on the next day, she was flying to Vienna to finish her master studies in music.

The song ‘’Baby, It’s a Wild World”, a rock classic by Cat Stevens which was one of their favorites, was playing from Kim’s laptop as the two of them were reliving their memories from the time they met and started dating. They’ve been together for five years, since they both turned 18, and now, as the moment of parting was approaching, it seemed like those years had passed in a snap.

Suddenly, Kim turned to her partner and tenderly caressed her cheek, tightening the grip on her hand. She said, “Promise me this isn’t the last time we’re lying together like this”. ‘’I promise”, replied Lara, “We’ll make it somehow, I’m sure. I love you”.

Instead of saying, “I love you too”, Kim pulled her girlfriend closer and kissed her passionately. They started making out while they were slowly taking off each other’s clothes.

On the next day at the airport, they embraced each other tightly and it was then that they both knew – it was just a small goodbye, not yet a farewell. They were sure that they would be united one day.